Independent Contractors put you at Risk

Hiring a home care independent contractor can put you at risk 0f senior abuse in Florida.  Hiring  a care giver off the street or some web site it can be very risky!  Please click the following link to understand the types of home care providers in Florida – https://www.partnersinhc.com/orlando-home-care/types-of-home-care/.  The following articles highlight however sadly senior abuse in Florida as reported in the news.  Don’t be a victim select a licensed and accredited Home Health Agency.

By Lucas Seiler, Reporter – email
Renee Rolston
CHARLOTTE COUNTY –A woman hired to take care of an 83-year-old Deep Creek man is accused of stealing over $11,000 from him over a span of several months.Renee Rolston, 32, of Port Charlotte was supposed to handle the victim’s expenses, along with performing housekeeping and other care giving needs.The victim had been recovering over the summer after being hospitalized from injuries due to a few falls. When he checked his bank statement, he noticed a number of unauthorized charges in Charlotte and Lee counties.At that point, he checked his wallet and noticed his debit card was missing – the victim had only given Rolston permission to write checks for him which he’d then sign.Investigators confirmed with Charlotte State Bank that all purchases were made while the victim was in the hospital. Video surveillance was also obtained of Rolston making various purchases totaling $11,315 from July to September.This isn’t the first time Rolston has been in trouble with the law — she was arrested in 2005 on fraud charges.She was arrested for Grand Theft and Fraudulent Use of a Credit Card. Rolston was released from the Charlotte County Jail on a $5,000 bond.  http://www.nbc-2.com/story/24206458/caregiver-accused-of-stealing-11000-from-elderly-man#.U35JgfldWjU

Relatives of a hard-of-hearing, legally blind 80-year-old widower with dementia were arrested Friday after a six-month investigation revealed that they misappropriated at least $870,000 of his money, the Orange County Sheriff’s Office said.

BROOKSVILLE — A woman accused of stealing roughly $25,000 from an elderly man in her care was sentenced Friday to five years of probation.

Joy Serini, 40, pleaded no contest to one count of exploitation of the elderly. Hernando County Circuit Judge Anthony Tatti departed from the minimum guideline of 21 months in state prison on the condition Serini pay back the money prosecutors say she stole from a 91-year-old Spring Hill man who suffered from dementia.

Serini is required to pay at least $400 a month, said Assistant State Attorney Rob Lewis. She faces up to 15 years in prison if she violates the terms of her probation.

Serini, who was arrested in November and now lives in Pasco County, was serving as an informal caregiver for the man and stole the money by making fraudulent check, debit card and credit card transactions, according to the Hernando Sheriff’s Office. Detectives say Serini’s husband, roommate and one of her close friends all told investigators she was using the man’s checks and cards to make purchases for herself and withdraw money from his account at ATMs.

“Though we believe at trial we would have shown she was not guilty of stealing that much money, we felt it was in her best interest to accept the deal as offered,” said Assistant Public Defender Dave Bauer.

PUNTA GORDA, FL –Police say a caregiver in Punta Gorda used credit cards and checks from her elderly patient to steal over $10,000.After months in the hospital, 80-year-old Deloris Surgeon is happy to be home. “I could be better, but I feel good,” she admits.  While she was in the hospital late last year, her family noticed something strange.  “We found the receipts and saw there were lots of charges on my grandmother’s credit card,” explains Dawn Croy, Surgeon’s granddaughter.  Croy was always a little suspicious of her grandmother’s caretaker, Teresa Shelton. Shelton knew the family through church and moved in last October to help around the house.  She wasn’t an employee for a home health agency. “She had a lot of my grandmother’s credit cards and she was probably going on a shopping spree,” Croy speculates. She found out Shelton had written herself checks from Surgeon’s bank account. She even opened a credit card account in Surgeon’s name.Police believe she used multiple credit cards spending more than $10,000 on TVs, gas and other items.”She took advantage of my grandmother’s trust. That’s what’s most upsetting,” Croy says.The Punta Gorda Police Department found Shelton on surveillance footage making several transactions with the victim’s credit card.  “Unfortunately, there are some people who prey on the elderly,” Lt. Jim Kirdy points out.According to the Department of Elder Affairs, 16 percent of elder abuse cases in Florida last year involved similar exploitation.Croy also thinks Shelton was stealing her grandmother’s prescription drugs and replacing them with over the counter medicine, which may have led to Surgeon’s recent health issues.  Shelton turned herself in Wednesday. She told authorities she is addicted to prescription drugs and was using the money to support that habit.

The 33-year-old is in jail facing 12 felony and one misdemeanor charges. Police say more could be coming.  http://www.nbc-2.com/story/21087694/former-caregiver-arrested-on-fraud-and-theft-charges

A caregiver with a history of abuse is accused of swindling a disabled Port Orange woman of nearly $400,000 and neglecting her care, authorities said Wednesday.

Sheriff’s investigators arrested Sandra Cooper on Tuesday on charges of exploitation and neglect of an elderly person. The 56-year-old is on probation stemming from a Seminole County elderly-abuse case, officials said.  http://articles.orlandosentinel.com/2005-11-17/news/VEXPLOITATION17_1_visit-fox-cooper-elderly

A man who noticed bruises on his father, a nursing home resident with dementia, set up a hidden camera and caught two employees hitting him, a Winter Haven police spokeswoman said. 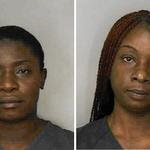 “Upon the completion of this investigation and the satisfaction of all legal and law enforcement issues, we will determine and enact any necessary changes to prevent such actions from ever occurring again,” Bomberger said in a statement.

The nursing home resident, 76, is diagnosed with dementia and psychosis, according to affidavits in the case. The man’s son placed a hidden camera pointed at his bed after noticing bruises on his arms and legs, police said.

On Oct. 7, video shows, Jones punched the air in front of the man’s face after he seemed to try and lunge forward as she and another employee repositioned him in his bed.

The following week, onOct. 16, the camera recorded Blaise and a second employee moving the man from a wheelchair to his bed.

The man was irritated, and Blaise appeared to kick or stomp on his legs or feet, according to her charging affidavit.

On Oct. 24, Jones and a third employee were changing the man’s clothes, police said. Jones grabbed the man’s wrists, and the two struggled. Jones ran to the foot of the bed and pinned down the man’s legs.

She then moved to his bedside, grabbed his wrist, and slapped his head, police said. The man tried to sit up, and Jones and the other employee ran away, police said.

Jones and Blaise are being held without bond.